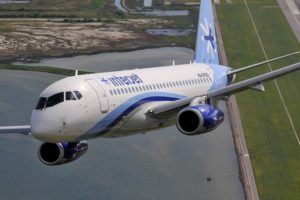 The Sukhoi Civil Aircraft Company, the manufacturer of Sukhoi SuperJet 100 (SSJ 100) aircraft, officially reports that the current statistics show that for the period from July 2016 to June 2017 marked a positive trend for the main indicators of reliability and serviceability of the park. The report comes in response to media reports on the decrease in the reliability of the SSJ 100 fleet.

While maintaining the existing dynamics, systematic improvement of the indicators is expected.

“Any aircraft manufacturer is working to improve the reliability of the aircraft throughout its life cycle. The Sukhoi Civil Aircraft Company is constantly implementing a program to improve the reliability and serviceability of the SSJ 100 fleet, which encompasses a full range of support areas for the operator and consists of an extensive plan for constructive, production, information, and organizational activities, most of which have already been implemented”, says the statement of the company. “At the same time, it should be noted that planning for aircraft downtime for routine maintenance, fault elimination and implementation of developer service bulletins is carried out by each operator independently”, adds the official statement.

For its part, in order to improve the efficiency of the aircraft operation, the Sukhoi Civil Aircraft Company provided filling of spare parts warehouses at a level of not less than 95%. More than doubled the effectiveness of performance on time of the most important for the economy of operators applications for spare parts. Improvement of indicators became possible due to the growth in several times the filling of the feeding warehouse in Zhukovsky. In April-June the indicator continued to increase steadily, confirming the stability of the positive dynamics.