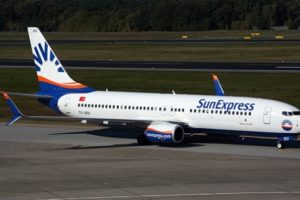 Sun Express aircraft Boeing 737-800 landed by emergency in Sofia Airport in Bulgaria, due to deterioration of passenger health and the need to make him a heart massage. However, despite the immediate medical assistance, the passenger has died.

The aircraft Boeing 737-800 was performing flight SXS977 from Munchen (Germany) to Izmir (Turkey), but during passage through Bulgarian airspace the plane asked to emergency land, due to deterioration of passenger health. The pilot diverted the aircraft to Sofia and the medical assistance was waiting at the airport. Unfortunately, Bulgarian medics were not able to rescue the passenger.

“The ambulance was on the runway when the plane landed, but the passenger had already died. Мany other passengers were deeply stressed and bothered by the situation, and the Emergency Team had helped them”, commented from the Bulgarian Emergency Center.

The aircraft was detained for several hours at Sofia Airport for clearing formalities around the death of the passenger. All the passengers were provided with needed medical assistance, food and water.

The Boeing 737 is a short- to medium-range twinjet narrow-body airliner developed and manufactured by Boeing Commercial Airplanes in the United States. Boeing 737 Next Generation is the name given to the −600/-700/-800/-900 series of the Boeing 737 airliner. It is the third generation derivative of the 737.