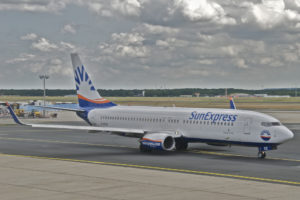 Sunexpress Deutschland aircraft Boeing 737-800 reported smoke in the cockpit during climbing from Nuremberg (Germany) en route to Hurghada (Egypt). The aircraft was performing flight XG-4665, but shortly after takeoff there was smoke in the aft galley and the pilot diverted to Munich (Germany), where landed safely on runway 26R about 30 minutes after departure. Meanwhile, the crew took immediate action and discharged the fire extinguisher into the hotspot, preventing a more serious accident.

The emergency teams of Munich airport were waiting for the landing of Sunexpress Deutschland aircraft Boeing 737-800 on standby. Fortunately, the fire was completely extinguished and did not cause any serious damages to the aircraft.

All the passengers were hosted in the transfer zone at Munich airport for more than 12 hours until the aircraft was inspected. the technical experts estimated that the plane can return in service and performed the flight to Hurghada (Egypt), arriving with a delay of 14 hours.

Boeing 737-800 is a short- to medium-range twinjet narrow-body airliner. It is part from the Next Generation line of the manufacturer, featuring with redesigned, increased span wing, upgraded “glass” cockpit, and new interior.