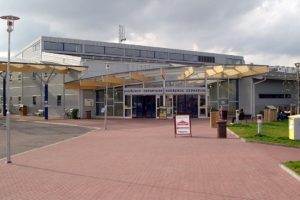 The Swedish Stockholm Skavsta Airport was evacuated following a scare over a suspected explosive device in a bag. The bag was detected by the security officers of the airport, which established a safety perimeter around the site. The staff evacuated passengers from the airport, which is located on 100 km south of Stockholm and use by budget airlines, because of suspicion for explosive device during a security check on baggage.

“Skavst airport was cleared of passengers on Wednesday after finding an object with suspicion of an explosive at the time of inspection. At 12.45 local time they said that the danger had passed”, says the official statement of the Stockholm Skavsta Airport.

The security team reacted to the suspicious bag, and the police arrived in the place decided to evacuate the people. The specialists who examined bags, said that its contents do not pose a danger.

For the duration of the checkup, 200 people were evacuated from the airport building.

After around an hour the airport was reopened just before 13:00 local time. Small delays in air traffic are likely but no cancellations are expected. No one was injured during the accident.

Stockholm Skavsta Airport is an international airport near Nykoping, Sweden. It is served by low-cost airlines and cargo operators, and is the fifth-largest airport in Sweden, with an ability to handle 2.5 million passengers annually. The airport is located far outside Stockholm Municipality and Stockholm County, but uses Stockholm for marketing purposes. Locally the airport is referred to simply as Skavsta.