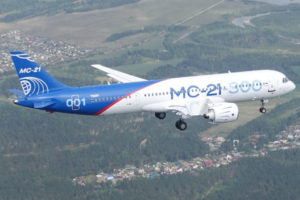 “We do not just hope, we dream that someday we will have a Russian Irkut MC-21 aircraft”, said Ali Hammoud, expressing confidence that the Russian aircraft will be better than all types of Western aircraft. He stressed that in 2016 only one passenger aircraft remained in the Syrian aircraft fleet.

“Our passenger terminals were almost completely destroyed by attack and bombing by Israel. Today we came to the conclusion that five aircraft are in constant operation. Even despite all the difficulties that we have in supplying spare parts to them”, added the country’s Transport Minister, Ali Hammoud.

He also noted that today Damascus Airport is enough to serve the passenger traffic during the war.

Irkut MC-21 is a Russian single-aisle twinjet airliner, developed by the Yakovlev Design Bureau and produced by its parent Irkut, a branch of the United Aircraft Corporation (UAC). It has a carbon fiber reinforced polymer wing and is powered by Pratt & Whitney PW1000G or Aviadvigatel PD-14 turbofans. the aircraft has a capacity of 132–163 passengers in two class, up to 165–211 and up to 6,000–6,400 km (3,200–3,500 nmi) range.