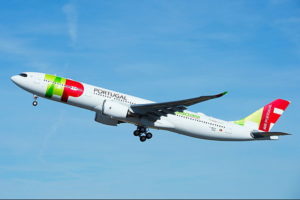 TAP Air Portugal received a new wide-body aircraft Airbus A330neo, becoming the first operator of this type in the world. In the coming years, the airline should receive another 20 A330-900neo aircraft.

Airbus A330-900neo has a three-class cabin layout designed to accommodate 298 passengers (34 in business class, 96 in the improved economy and 168 in the economy). The aircraft will be operated on routes from Portugal to the countries of South and North America, as well as Africa.

“We are pleased to become the first operator of the Airbus A330-900. The A330neo will give us even more operational flexibility due to unification with our current Airbus fleet. This is the first aircraft equipped with a new, more comfortable cabin airspace, which fully corresponds to our ambitions to offer passengers the best product and services in flight”, said the President of TAP Air Portugal, Antonoaldo Neves.

“The transfer of TAP Air Portugal’s first A330neo aircraft is an important event for us. Thanks to the introduction of new technologies, the A330neo will be able to offer passengers even more comfort, and to operators – maximum efficiency, which will be another important step towards the sustainable development of the aviation industry”, said the President of Airbus Commercial Aircraft, Guillaume Faury.

Airbus A330neo aircraft are based on the technology used in creating the A350 XWB. The A330neo family is represented by two models: A330-800 and A330-900, designed to accommodate 257 and 287 passengers in three classes. These aircraft are equipped with highly efficient Rolls-Royce Trent 7000 engines with a bypass ratio of 10:1, have an improved aerodynamic contour (new A350 XWB tips, increased wingspan, titanium pylons), and are equipped with the new Airspace passenger cabin. Compared to the competing aircraft of the previous generation, the fuel consumption “per seat” of the A330neo has decreased by 25%.

In total, Airbus received more than 1,700 orders from 120 customers for aircraft of the A330 family. Currently, more than 1,380 aircraft of this family are operated in the park of 128 operators around the world.