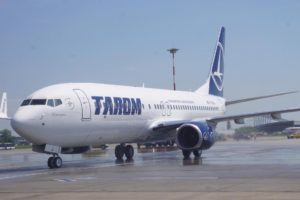 Aircraft of the Romanian airline TAROM stopped climbing out of Bucharest Otopeni airport due to suspected oil leak. The aircraft Boeing 737-300 was en route to Amsterdam (Netherlands), but following the indication for technical problem the pilot decided to divert and return back to Bucharest Otopeni airport, where landed 50 minutes after departure. The landing was safe without reported injuries and problems for the passengers and the crew.

The aircraft remained on the ground for about 80 minutes. it was inspected by airport technicians and then departed again for Amsterdam. The aircraft Boeing 737-300 reached the destination with a delay of about 2.5 hours.

The Romanian Aviation Safety agency will check the case.

The Boeing 737 Classic refers to the -300/-400/-500 series of the Boeing 737. It is the second-generation derivative of the 737. They are short- to medium-range, narrow-body jet airliners. The aircraft includes three variants and can seat between 145 and 188 passengers, CFM International CFM56 high-bypass-ratio turbofan engines and upgraded avionics.

Newer PostFedEx retains its pilots with bonuses of up to 110,000 USD
Older PostThe EU accused Ryanair of violating consumer rights