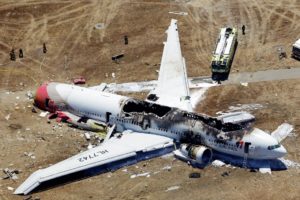 Recently, the media turned its focus to aviation safety. Even the planes being safe enough, the aircraft crashes are rare but bloody incidents. And although many people have lost their lives in a plane crash, they are not as lethal as we imagine.

The chance to die in a plane crash is extremely low. Even if we find ourselves in a crash plane, our chances of survival are quite high.

According to the US National Transportation Security Board, 95.7% of passengers who were in a plane crash between 1983 and 2000 survived. This is due to the way the plane is built, its safety and physics as a whole.

However, today we will present the ten deadliest plane crashes.

On April 26, 1994, China Airlines Airbus A300 crashed into the ground near the runway shortly before landing at Nagoya Airport. The aircraft exploded on the ground and 264 people were killed. The cause of the crash is a loss of control due to a human mistake.

The first officer inadvertently selected the takeoff/go-around setting (also known as a TO/GA), which tells the autopilot to raise the throttle position to the same as takeoffs and go-arounds. The crew attempted to correct the situation, manually reducing the throttles and pushing the yoke forward. However, they did not disconnect the autopilot, which was still acting on the inadvertent go-around command it had been given, so it increased its own efforts in reaction to overcome the yoke forward being enacted by the pilot. The autopilot followed its procedures and moved the horizontal stabilizer to its full nose-up position, which resulted in an extreme nose-up attitude and combined with decreasing airspeed due to insufficient thrust, caused an aerodynamic stall.

To date, the accident remains the deadliest accident in the history of China Airlines, and the second-deadliest aviation accident in Japan.

On November 12, 2001, the plane crashed shortly after takeoff into the Belle Harbor neighborhood of Queens. All 260 people aboard the plane (251 passengers and 9 crew members) were killed, along with 5 people on the ground. The aircraft suffered a technical problem due to the strong turbulence after takeoff. The vertical stabilizer and rudder failed, which caused the crash. The NTSB concluded that the material had failed because it had been stressed beyond its design limit. 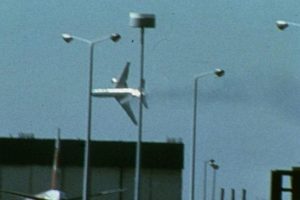 Engine number one (the left engine) separated from the left wing, flipping over the top of the wing and landing on the runway. As the engine separated from the aircraft, it severed hydraulic fluid lines that locked the wing’s leading-edge slats in place and damaged a three-foot section of the left wing’s leading edge. The aircraft crashed near the runway and exploded.

With 273 fatalities it is the deadliest aviation accident to have occurred in the United States.

On February 19, 2003, Ilyushin Il-76 crashed in mountainous terrain near Kerman in Iran.

Strong winds were reported in the region of the crash when the aircraft disappeared from the radar screens, approximately at the same time, villagers in the area described hearing a loud explosion. There were no survivors among the 275 occupants on board the aircraft. 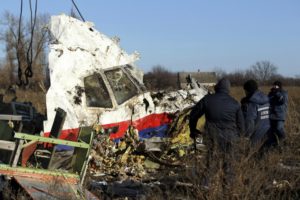 Boeing 777-200ER of Malaysia Airlines was performing flight 17 from Amsterdam to Kuala Lumpur but was shot down on July 17, 2014, while flying over eastern Ukraine, killing all 283 passengers and 15 crew on board.

The accident happened about 50 km from Ukraine–Russia border and wreckage of the aircraft fell near Hrabove in Donetsk Oblast, Ukraine. The shoot-down occurred in the War in Donbass, in an area controlled by pro-Russian rebels.

it is not yet clear who exactly shot down the Malaysia Airlines Flight 17, despite that many international experts accuse the pro-Russian rebels for the accident.

On August 19, 1980, a fire broke out on board of the Lockheed L-1011-200 TriStar aircraft, which was performing a flight from Riyadh International Airport en route to Jeddah, Saudi Arabia. The accident happened shortly after takeoff and the airplane made an emergency landing at El Riyadh airport

Due to a problem with the electrical equipment, the doors can not be opened and the staff failed to provide evacuation on time. This caused the death of 301 people. There are no survivors.

Turkish Airlines Flight 981 was a scheduled flight from Istanbul Yesilkoy Airport to London Heathrow Airport, with an intermediate stop at Orly Airport in Paris.

On March 3, 1974, the McDonnell Douglas DC-10 operating the flight crashed into the Ermenonville Forest, outside Paris, killing all 346 people on board.

The crash occurred when an incorrectly secured cargo door at the rear of the plane burst open and broke off, causing an explosive decompression that severed critical cables necessary to control the aircraft. When the door blew off, the primary, as well as both sets of backup control cables that ran beneath the section of floor that blew out were completely severed, destroying the pilots’ ability to control the plane’s elevators, rudder, and number two engine. The flight data recorder showed that the throttle for engine two snapped shut when the door failed. The loss of control of these key components resulted in the pilots losing control of the aircraft entirely.

The accident happened over the village of Charkhi Dadri, around 100 km west of Delhi. The crash killed all 349 people on board both planes, making it the world’s deadliest mid-air collision and the deadliest aviation accident to occur in India.

Both airplanes did not have a collision avoidance equipment and the pilots understood wrongly the flight control due to bad English knowledge.

On August 12, 1985, Japan Airlines Boeing 747SR, which was performing Flight 123 from Tokyo’s Haneda Airport to Osaka International Airport, suffered a sudden decompression 12 minutes after takeoff and crashed in the area of Mount Takamagahara in Gunma Prefecture on 100 km from Tokyo.

The aircraft, configured with increased economy class seating, was carrying 524 people. Casualties of the crash included all 15 crew members and 505 of the 509 passengers. Some passengers survived the initial crash but subsequently died of their injuries hours later.

Japan’s Aircraft Accident Investigation Commission officially concluded that the rapid decompression was caused by a faulty repair by Boeing technicians after a tailstrike incident during a landing at Osaka Airport seven years earlier (1978). A doubler plate on the rear bulkhead of the plane had been improperly repaired, compromising the plane’s airworthiness. 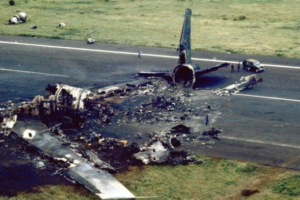 On March 27, 1977, two Boeing 747 passenger jets, KLM Flight 4805 and Pan Am Flight 1736, collided on the runway at Tenerife’s Los Rodeos Airport in the Canary Islands, killing 583 people, making it the deadliest accident in aviation history.

The collision occurred when the KLM airliner initiated its takeoff run while the Pan Am airliner, shrouded in fog, was still on the runway and about to turn off onto the taxiway. The impact and resulting fire killed everyone on board KLM 4805 and most of the occupants of Pan Am 1736, with only 61 survivors in the front section of the aircraft.

The subsequent investigation by Spanish authorities concluded that the primary cause of the accident was the KLM captain’s decision to take off in the mistaken belief that a takeoff clearance from air traffic control (ATC) had been issued. The bad visibility also had a role in the aviation accident.