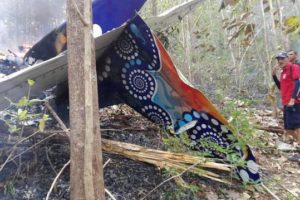 Charter aircraft Cessna 208B Grand Caravan operated by Nature Air crashed at wooded terrain near Punta Islita in Costa Rica. All the 12 people on board suffered fatal injuries and died. The aircraft with 10 US tourists and 2 local crew members fell several minutes after takeoff from Punta Islita Airport en route to San Jose-Juan Santamaria International Airport.

At the scene of the accident arrived safety inspectors and local police officers, who found the airplane in flames and confirmed that there are no people alive on the site.

The Public Safety Information confirms that it is a private flight hired by a group of tourists who were staying in a nearby hotel. A spokesperson for the US State Department confirmed the deaths of “multiple US citizens” in the crash.

Nature Air said in a statement that it lamented the accident, without explaining the cause. The flight was part of a special charter service for 20 people, relying on two planes. The first plane, carrying 10 passengers, arrived safely in San Jose at 11:40 a.m. The second, with 10 passengers and two pilots, departed 20 minutes later.

Cessna 208 Caravan is an American single-engined turboprop, fixed-tricycle landing gear, short-haul regional airliner and utility aircraft that is built by Cessna. The airplane typically seats nine passengers with a single pilot, although with a FAR Part 23 waiver it can seat up to fourteen passengers.