United States Marine Corps Colonel Matthew Kelly, Director of the V-22 Joint Program, said “The V-22 provides unmatched capacity for Marines and the Air Force Special Operations Command of U.S. The influence of the platform in the defense of our nation is seen through its extensive operational and humanitarian impact throughout the world. ”

The V-22 Osprey is the only tiltrotor production aircraft in the world, allowing the military to carry out various missions in the most difficult operating environments. More recently, the aircraft was deployed to assist in relief efforts in the Bahamas following Hurricane Dorian.

“The V-22 is one of the most demanded platforms in the Department of Defense. This achievement is a great testimony for the Marines and Air Commands that operate this platform in all environments ”

Since 2007, the V-22 has continuously served the Marines and the Navy, as well as the Special Operations of the Air Force. A third variant, the CMV-22, is scheduled to join the U.S. Navy fleet in 2020. 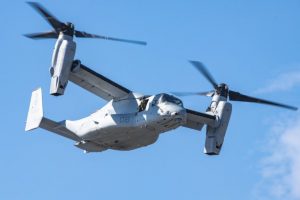