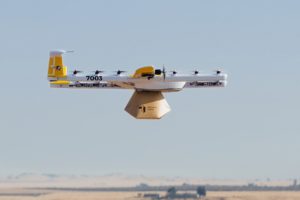 The US Federal Aviation Administration (FAA) allowed a private American company to use drones to deliver goods to consumers. This right is granted to Wing Aviation, which is part of the Alphabet holding structure, and this could give an impetus to the emergence of UAV delivery services throughout the country.

The company has developed a cargo drone Hummingbird, capable of taking off vertically and then go into horizontal flight. Flight control is performed by the operator from the ground. Earlier, Wing Aviation tested the system, delivering orders from grocery stores to residents of a rural area near the city of Blacksburg in Virginia for free. Experts from the Polytechnic Institute and the University of Virginia participated in organizing these test flights.

Wing says the approval means that it can begin a commercial service delivering goods from local businesses to homes in the United States.

Now, after having received permission from the FAA, the company will be able to set tariffs for its delivery services and develop business in other areas. The ground operators will have to undergo special training, local authorities will have to approve security measures for the delivery of goods, and the company will be required to collect and provide data to the regulatory authorities on any malfunctions. In fact, Wing Aviation will act according to the rules provided for a small aircraft.

Newer PostRyanair Boeing 737 landed by an emergency at Paris-Beauvais Airport after engine failure
Older PostSAS has canceled more than 1,200 flights due to pilots’ strike