The future European fighter plane, an ambitious joint project of France, Germany and Spain, starred on Monday the first day of the air show in Le Bourget, outside Paris.

“This project now takes a totally European dimension with the arrival of Spain,” said Minister Parly. According to its environment “is the proof that the European will materializes to have an industrial base in Europe capable of taking on the challenge of the Chinese, Russian and American industries”.

The objective is to replace the current Rafale and Eurofighter aircraft by 2040, Parly said.

The research and development studies will cost 150 million euros in two years and the first results are expected in 2026.

The SCAF is designed as a system that associates a new generation fighter plane with drones and missiles that move together. The system will also be connected to aircraft, satellites and NATO systems, both terrestrial and naval.

With the signing of this Monday, Spain is officially incorporated into this ambitious project, a stage in the complex construction of a European defense, an idea that Macron defends in particular and that the United States does not like, which wants to continue selling its military products to Europe.

“Spain joins France and Germany today, which is important because the countries of Europe have a tendency to buy in the US We propose a European aircraft for Europeans, independent of the American technologies,” CNEws newscaster Eric Trappier told the news network. , president of Dassault Aviation, which leads the SCAF project with Airbus.

President Macron arrived in the morning at the air show on the outskirts of Paris aboard the new tanker of the French army A330 MRTT and then attended an air parade.

The show will be marked this year by the role of the aeronautical sector in climate change and safety issues, as in the case of Boeing 737 MAX airplane, involved in the last few months in two fatal accidents.

In the civil aviation sector, there are good prospects thanks to forecasts of growth in air traffic, which would double in the next 20 years, according to Boeing, to reach some 44,000 active aircraft.

On the other hand, the environmental issue will put forward the technological advances in propulsion systems, alternative fuels to kerosene, construction materials or new futuristic designs.

Aircraft manufacturers are under pressure to build less polluting devices and achieve the goal of halving carbon dioxide (CO2) emissions by 2050 compared to 2005.

Air transport is responsible for at least 2% of CO2 emissions. According to figures from the European Environment Agency, carbon dioxide emissions far exceed that of other means of transport.

The American Boeing, rival of the European Airbus, arrives this year to the living room in the heat of crisis of its model 737 MAX, immobilized since March after two tragic fatal accidents that weighed the confidence in the company.

“Security is sacred in this company,” he added, and said Boeing would do everything possible so that “accidents like this never happen again.” 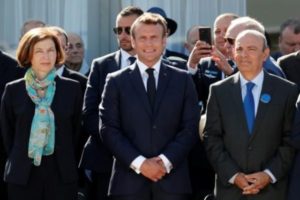 President Emmanuel Macron with the French Minister of Defense, Florence Parly, and the President of Dassault Aviation, Eric Trappier, in the Le Bourget room, on June 17, 2019

The company is collaborating with regulatory authorities, including the US FAA, so that the 737 MAX can fly again, but “the regulators will decide the date of commissioning,” he said.

Asked about the competition with Airbus, which announced the release of a version of the A321 aircraft with an extra-long-range radio – named the A321 XLR – McAllister said only that Boeing still has a “formidable” range of aircraft.

Newer PostFlying Taxis Will Bring Noise And Safety Problems To The Skies Of Cities
Older PostLuis Pérez Gómez, A Mexican In The Europe Of The Second World War