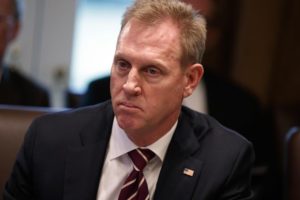 The inspector general of the US Department of Defense did not find evidence that the acting head officer of the department, Patrick Shanahan, through illegally promoted the interests of Boeing Corporation. This is stated in a written statement, which made public on Pentagon’s Chief Inspector’s Office, Glenn Fine.

“The Office of Inspector General took these allegations seriously, and our 43-page report of investigation, which we released today, describes our conclusions and the facts on which they are based. The evidence showed that Acting Secretary Shanahan fully complied with his ethical obligations and ethical agreements with regard to Boeing and its competitors”, Glenn Fine, the IG official who oversaw the investigation.

As it clarifies, the proceedings relating to the actions of Patrick Shanahan, was launched on March 15.

“During the investigation, we conducted interviews with Mr. Shanahan and 33 witnesses. We studied more than 5,600 pages of documents without secrecy heading, and about 1,700 pages of classified documents related to the charges. We did not find any evidence of the authenticity of any charges”, added Glenn Fine. According to the inspector general, Shanahan “fully complied with” ethical requirements designed to ensure that there is no conflict of interest.