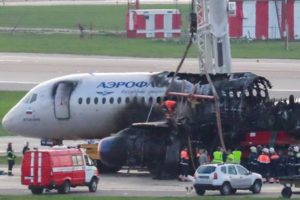 In the criminal case about the crash of the Aeroflot plane SSJ 100, which caused the death of 41 people, the main version for the accident is related to the actions of the pilots.

On Monday, experts of the Interstate Aviation Committee began decrypting the parametric and speech recorders of a burned aircraft. The official representative of the committee, Svetlana Petrenko, reported that the investigation considers various versions of what happened at Sheremetyevo, including insufficient qualifications of pilots, dispatchers, and persons who conducted a technical inspection of the aircraft, malfunction of the aircraft itself and even adverse weather conditions.

It will be possible to talk about the causes of the tragedy after analyzing the information from the instruments, but today experts agree that the catastrophe was most likely due to the mistakes of the crew.

The first mistake was the decision of the pilots to fly across the thunderstorm. Then, having got into a difficult but far from catastrophic situation with automatic shutdown, the pilots, according to air experts, hurried to land instead of holding several hours in the air and burn out excess kerosene. Finally, already in the process of landing, the SSJ crew, as aviation experts believe, demonstrated their extremely weak training.

In parallel, the investigation deals with the airport ground services, which may not have promptly responded to the incident.

The final conclusions on the causes of the catastrophe will be made by the experts of the Investigative Committee.

More about the accident:
41 dead after Aeroflot SSJ100 burst into flames during emergency landing at Sheremetyevo Airport [06/05]
Aeroflot will pay compensation to all passengers of flight SU1492 [07/05]