Its mass (equivalent to putting two suns inside a sphere of 30 km in diameter) approaches the limit of how massive and compact an object can become without becoming a black hole.

Imagine a sphere about 30 kilometers in diameter and on the other hand, think of the Sun. Now try to put two suns into that sphere. So massive is a neutron star detected by a team of astronomers 4,600 light years from Earth.

It is called J0740 + 6620, and as its discoverers detail in an article published in the journal Nature Astronomy , it is the most massive neutron star that has been located so far .

A neutron star is what remains when a super-giant star reaches the end of its life. When depleting its core fuel, it explodes like a supernova. It is called that because it is composed mainly of neutrons.

Specifically, the measurements made with data from the Green Bank Telescope suggest that its mass would be equivalent to 2.17 soles (the mass of the Sun is 333,000 times that of the Earth) and would be concentrated in a sphere between 20 and 30 kilometers of diameter. 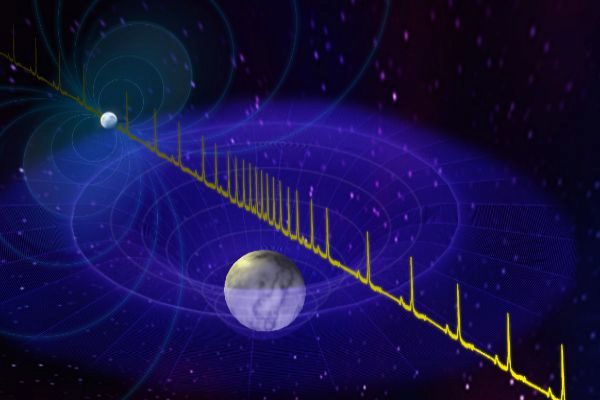 In order to get an idea of ​​how massive it is, its discoverers give this example: a cube (the size of a lump of sugar) filled with the material that composes it would weigh 100 million tons on Earth.

These figures, say their authors, are very close to the limit of how massive and compact an object can become without becoming a black hole, according to estimates based on observations made with the LIGO interferometer, which looks for gravitational waves (disturbances in space time produced by very violent and distant events in the cosmos, such as the fusion of two black holes or two neutron stars).

The discovery of this massive neutron star was made while scientists searched for gravitational waves with the Green Bank telescope.

“With Green Bank we are trying to detect gravitational waves from pulsars [which are neutron stars that emit radiation at short and regular intervals],” explains Maura McLaughlin, a physics professor at Eberly College of Arts and Sciences and co-author of the study.

As pulsars are regular, astronomers can use them as if they were a kind of cosmic atomic clock that helps them study the nature of space time, measure masses of stellar objects and increase their knowledge of general relativity.

“Neutron stars are as mysterious as they are fascinating,” says Thankful Cromartie, a student at the University of Virginia and lead author of this study, who has calculated the mass of the neutron star through a phenomenon resulting from general relativity called the shapiro effect.

According to this effect (discovered in 1964 by physicist Stuart Louis Shapiro), the time of arrival of a signal that is spreading through space is affected by the presence of matter around it.

If there is, the signal no longer travels in a straight line and has to travel a longer path than if it did not find any obstacle in its path.

Precisely the astrophysicists are waiting to confirm if two signals detected this year in the LIGO (US) and Virgo (Italy) interferometers correspond to gravitational waves from a fusion of a black hole and a neutron star.

The signals were collected on April 26 and August 14 respectively and if their nature is confirmed, it will be the first time this cosmic phenomenon is observed.

The signal detected on April 26 is still pending confirmation: “An important difference with that of August 14 is that the latter has a probability of being real (that is, not caused by” noise “in detectors of terrestrial origin ) much larger than April 26, “he says.

Newer PostBrad Pitt Chatted with an Astronaut About his New Space Movie: “Let’s talk about me, how did i do?”
Older PostA US Soccer Team Throws $10,000 at Fans From a Helicopter