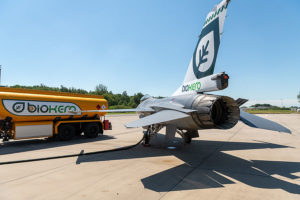 The Ministry of Defense of the Netherlands has announced plans to gradually transfer all the country’s military aviation on biofuel. As a first step, the military began to purchase biofuels for the air base in Leeuwarden, which will fuel all F-16 Fighting Falcon fighters.

Military aviation is the largest consumer of fuel in the world. It is believed that the transfer of fighters to biofuels will significantly reduce emissions of carbon dioxide, one of the main factors of global warming. In particular, the United States is engaged in a gradual transfer of all ships and military aircraft to biofuel.

According to the Netherlands Ministry of Defense, in the middle of January 2019, 400,000 liters of biofuel produced by the American company World Energy from kitchen fats were delivered to the air base in Leeuwarden. Currently, all the F-16 fighters assigned to the airbase fly on a fuel mixture of 5% of biofuels and 95 percent of conventional jet fuel.

The aircraft perform test flights on the basis of which the proportion of biofuels in the mixture will increase. According to the plan of the Dutch military department, by 2030, all military aircraft of the country will fly on a fuel mixture with a 20% addition of biofuels, and by 2050 – with a 70% content of alternative fuel.

The decision to transfer all airbase fighters to a mixture of hydrocarbon and biofuels was taken on the basis of tests conducted in 2018. Then one of the F-16 airbase in Leeuwarden for two weeks was flying in a mixture with a 5% content of biofuels.