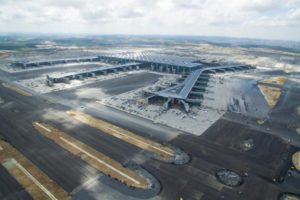 Turkish President Recep Tayyip Erdogan will take part in the opening ceremony of the Istanbul New Airport today, which, according to the Turkish authorities, will become the largest airport in the world. Currently, however, only the first phase of construction, worth 6 billion EUR, has been realized. The remaining stages should be completed by 2023. The total area of ​​the site amounts to 76.5 million sq m.

Istanbul’s new third airport is one of Erdogan’s major infrastructure projects and its opening on the Turkey’s national holiday, the day of the founding of the secular republic, is perceived by many as a political victory.

The airport will serve 250 airlines. Investments for the construction of the airport amount to 26 billion EUR.

Initially, the idea was for the airport to run at full speed as early as the end of October. However, due to delays in construction, only 5 destinations will be served from there. The airport will be fully operational on December 29, with over 90 million passengers expected to travel per year.