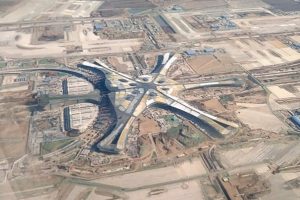 The new Beijing Daxing International Airport serviced the first test landing of aircraft, as part of the preparation for commissioning, which is tentatively scheduled for September 30, 2019.

“On January 22, at 10.10 local time, the plane landed smoothly on the western runway of Daxing International Airport in Beijing, leaving the first tire track on the runway. This marks the successful conduct of the first qualification check, says the message from the Chinese Civil Aviation Administration.

Four inspection teams monitored the landing of the aircraft, and specialists followed with particular attention to the lighting of the runway, navigation in the airspace, flight safety, and landing. It is noted that such inspections are of paramount importance for all new airports. Flight tests at the airport will be carried out regularly until March 15, during which the 4 runways, an omnidirectional radio beacon, an instrument landing system, and a lighting system must be inspected.

The new airport is located in the south of Beijing, 46 kilometers from the city center, the main reason for its construction was the desire to unload the international airport in the city, which is one of the busiest in the world. The distance between the two airports will be about 67 kilometers.

The new airport will have four runways and will be able to take up to 620,000 flights per year. The project provides that the capacity of the airport by 2025 will be 72 million people. Also by 2025, the new Beijing airport should handle up to 2 million tons of cargo per year.

Newer PostPassenger traffic at Brussels Airport in 2018 increased to a record 25.7 million people
Older PostThe Netherlands will transfer all military aviation to biofuel