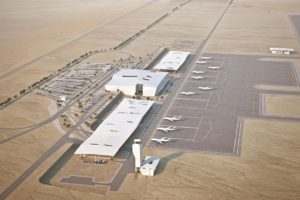 The new Israeli Ramon airport in the Timna Valley, 18 km from Eilat, was opened on January 21. The opening ceremony was attended by Prime Minister Benjamin Netanyahu, Minister of Transport and Intelligence Yisrael Katz, Director General of the Airports Authority Yaakov Ganot and other government officials.

Yisrael Katz said that from now on, Israel will have two international airports that meet modern standards.

The total area of the airport is 5,046 square kilometers, and the area of the passenger terminal building is over 35,000 square meters. The interior of the passenger terminal is trimmed with bamboo and aluminum. In the center of the building is located a decorative pool. A 50 m high control tower was built at the airport, having the latest electronic equipment. The runway of the new airport is one of the longest in the Middle East. Its length is 3.6 km, which allows taking off and landing of various types of aircraft, including large ones.

The total cost of building a new Israeli airport was about 1.8 billion shekels (about 450 million USD).

At the moment, the airport has space for 60 aircraft, but given the projected increase in passenger traffic in the future, their number is planned to double.

The airport is designed for international and domestic flights, it will replace the two southern air harbors – Ovda Airport and Eilat airport.