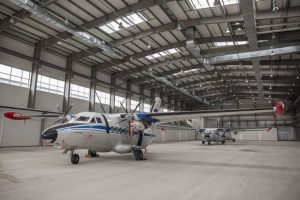 The new model of the regional aircraft L-410 NG will enter in service in Russia until the end of 2019, according to a representative of the press service of the Ural Mining and Metallurgical Company (UMMC).

The company Aircraft Industries, which developed the new plane with improved parameters and design to flights in the Arctic, announced that already has first customers interested.

The Czech aircraft manufacturer Aircraft Industries, established on the basis of the LET aircraft factory, is a subsidiary of the UMMC.

“The first Russian customers interested in the plane have already appeared and it is assumed that the L-410 NG will start operating in our country later this year. The plane is simple and unpretentious. It’s actually a flying minibus that can land in any conditions. It is capable for flying in Siberia and the Far East”, said the representative of the press service of the UMMC.

Rosaviatsiya certified a new model L-410, which differs from the base with improved flight and operational characteristics. Cruising speed of the regional aircraft L-410 NG is 417 km/h. The integral wing with a built-in fuel tank made it possible to almost double the range to 2,570 km. In addition, the luggage compartment of the aircraft was also doubled, which can now carry 400 kg more cargo.