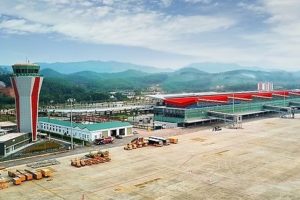 The new Vietnamese Van Don International Airport was officially opened. It is located 50 kilometers from Ha Long Bay in the north of the country.

The first ever Vietnamese airport, built with the money of the private investor Sun Group, opened for commercial flights in early January 2019 in the province of Quang Ninh. Now it is the closest airport to Halong Bay among the country’s air transport hubs.

The construction of the airport was carried out for two years and cost the investors 310 million USD.

As stated, the new airport is primarily focused on flights from Taiwan, South Korea, Japan, China, Thailand, Malaysia, Singapore, and Cambodia, as well as receiving domestic flights. At the moment, Vietnam Airlines is already flying to Van Don, but from January 20, Vietjet will open flights from Ho Chi Minh City.

The creation of Van Don was carried out under the plan of the Vietnamese government to build 13 international and 15 domestic airports by 2023. Currently, in Vietnam, taking into account the new airport, there are 21 airports.

Right up to the opening of the new airport, passengers wishing to visit Ha Long Bay most often flew to Haiphong or Hanoi airport, and then took a bus to the bay.