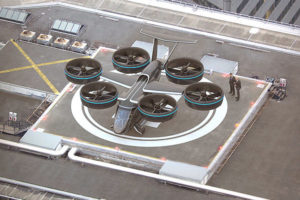 The American company Bell Helicopter presented a project of a promising passenger aerotaxis Nexus, which is planned to be performed in a configuration of a convertiplane.

The aircraft will receive a hybrid power plant and six electric fans on a rotary suspension. It is assumed that this solution will provide a relatively quiet device with a long duration of a flight, capable of using standard urban helicopter sites for landing and takeoff.

Today, many aircraft companies in the world are developing projects of light unmanned and manned aircraft that can be used to carry a small number of passengers both within the city and in the suburbs. It is believed that such devices will reduce the number of traffic jams and significantly speed up passenger traffic within the city, as well as between the city and suburb. Prospective aerotaxis planned to perform hybrid and all-electric.

The project of Bell Helicopter, Nexus, was presented at CES 2019, held in Las Vegas on January 8-11. The perspective aircraft is planned to be performed in five-seater – a pilot and four passengers. It will receive a battery and a gas turbine engine of the French company Safran. The latter will unwind a generator that generates electricity to recharge the battery, power electric fans, and onboard equipment.

On the Nexus will be installed six rotary electric fans, two in the bow, middle and tail parts. It is assumed that the air taxi will take off with fans installed parallel to the ground. For takeoff and landing, the device will be able to use standard helipads 11×11 m. After setting the height, the electric fans will lean forward, creating a driving force. In aircraft mode, in horizontal flight, the machine will be able to fly at a speed of 130 knots (241 km/h).

According to the project, the range of the Nexus will be about 240 km. Takeoff weight of the device will be 2.7 tons and will be able to carry passengers and cargo weighing from 360 to 450 km. It is assumed that regular flights will be able to start in the mid-2020s. Its testing and certification should not take much time, since the Nexus will fly in manned mode.