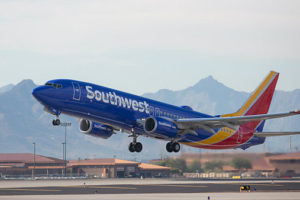 The US Federal Aviation Administration (FAA) is investigating Southwest Airlines, the largest American low-cost airline, due to numerous errors in estimating the total weight of the luggage loaded into the aircraft.

The FAA has confirmed that it is conducting an investigation into Southwest Airlines and is going to bring the airline’s practices into compliance with the regulations.

Тhe FAA checks revealed systematic and significant errors in the calculation of the weight of luggage by the airline’s staff, so the data after such a calculation strongly diverged from the calculations of the weight by pilots after takeoff. In some cases, the discrepancies reached more than 450 kg for the flight. Unlike other American airlines, Southwest Airlines is not using computer systems counting passengers’ suitcases, but employees – the airline’s total baggage weight is set by multiplying the number of suitcases by their average weight.

According to the FAA, incorrect information from the pilot about the weight of luggage and, accordingly, the distribution of weight between the front and the tail of the aircraft can increase the risks in case of emergencies. As there are no accidents related to this, the FAA has not yet decided whether it will impose a fine or some other punishment on Southwest Airlines. The airline said that it fully cooperates with the regulator.

Southwest Airlines is a major United States airline headquartered in Dallas, Texas, and is the world’s largest low-cost carrier. The airline has scheduled services to 99 destinations in the United States and ten additional countries.