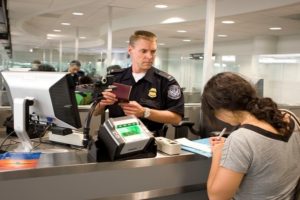 The US Transportation Security Administration has announced plans to use face recognition technologies at airports’ terminals responsible for domestic flights. The technology will significantly reduce the time for checking passengers.

In many countries the inspection of passengers on domestic flights is usually simplified compared to international flights, during which stamps are put on the border crossing at the entrance and exit. When traveling within the framework of a single visa zone, passenger control takes place mainly at the registration stage only. At some airports, additional controls have been introduced, for which technological solutions are often applied: for example, at a number of airports a passenger can independently scan passport during a flight.

In addition, fingerprints and other biometrics are not scanned for inbound flights. However, the introduction of such technologies in passport control on domestic flights can increase airport security. This will be handled by the Transportation Security Administration: its plans include, first and foremost, cooperation with the US Customs and Border Protection Service, which will provide both a database of people’s images and technology to recognize them. After that, face recognition as identification of passengers at the airport will be implemented for TSA Precheck program participants, which allows passengers to be tested without additional requirements such as removing shoes and belts. The company will then begin using face recognition technology on domestic flights.

According to the Administration, this technology will facilitate not only passport control. Later this month, they plan to use face recognition at one of the terminals of Hartsfield–Jackson Atlanta International Airport in Atlanta: there automatic face recognition will be used during the entire stay of the passenger at the airport (check-in, baggage inspection and boarding). The use of biometrics in this case will significantly reduce the time for verification.