The planets are temperate, similar to Earth and may have liquid water on the surface.

Finding exoplanets capable of harboring life is one of the great challenges of astronomy . Now, an international team of scientists has discovered two of the candidates with the most options so far: both are temperate, similar to Earth and could have liquid water on the surface.

The finding, led by scientists from the University of Göttingen (Germany), has been possible thanks to ‘CARMENES’, a Spanish-German project that since 2016 searches planets around nearby stars with the help of a spectrograph installed in the telescope 3-5 meters from the Calar Alto Observatory (Almería, southeast of Spain).

With this instrument and the images obtained by two other Spanish telescopes, the researchers were able to study in great detail the star of ‘Teegarden’ , a cold red dwarf located only 12.5 light years from our Solar System.

” Teegarden only has 8% of the solar mass, it is much smaller and less bright than the Sun. In fact, despite being so close to Earth, it was not discovered until 2003,” researcher Ignasi Ribas told Efe. co-author of the study.

The temperature of the star is 2,600 degrees Celsius (compared to 5,500 of the Sun) and being ten times less massive than it, it is 1,500 times weaker, so it radiates most of its energy at red and white wavelengths. infrared, ideal for ‘CARMENES’, which is designed to observe this type of radiation.

To determine if there were planets around the star, scientists used the Doppler technique , designed to discover planets that can not be observed directly.

And it is that, when a planet orbits a star, the gravitational attraction causes that it also moves, therefore, when a star approaches and moves away, it can be deduced that there is a planet in orbit.

From very early on, the Doppler measurements of the star of ‘Teegarden ‘ showed the presence of at least two signals, now identified as the planets ‘Teegarden b’ and ‘Teegarden c’.

The first has a mass similar to that of the Earth and orbits the star every 4.9 days, while the second completes its orbit in 11.4 days, “which is what its year lasts, that is, they are much closer of its star than there is the Land of the Sun. “

“Teegarden b, the innermost one, receives 10% more light than we do from the Sun, so we think it may be too hot and may not have water, but this is speculation because there are aspects of climate systems that we do not know and that could allow liquid water, “explains Ribas.

The second, ‘Teegarden c’, is in the middle of the habitable zone, which means that its temperature on the surface is between zero and one hundred degrees : it could perfectly have water on the surface.

There is no doubt that the two planets are among the best aspirants to house life , along with ‘Próxima b’, which until today was the best candidate and the one with the best living conditions. 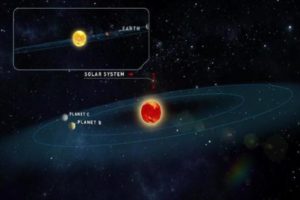 And, between the closest star to the Solar System (Proxima Centauri, 4 light years) and ‘Teegarden’ (the number 24 to 12 light years), there are a score of stars – some with planets around them – but “Except Próxima b, none has the ideal conditions,” the researcher points out.

The researchers do not rule out that ‘Teegarden b’ and ‘Teegarden c’ are part of a system with more planets, but in order to know it “they will have to be studied in detail, as well as two very interesting planets to look for life in the medium term”.

The next decade, when researchers have at their disposal giant telescopes such as the E-ELT (Extremely Large Telescope) or the Thirty-Meter Telescope (TMT), which will be able to capture directimages of the stars and their planets, it will be ” key and exciting “, adds Ribas.

The details of this stellar system are published today in Astronomy & Astrophysics.

Newer PostWatch As A Russian Su-27 Intercepts A US Bomber Near The Borders Of Russia (VIDEO)
Older PostSupposed Detailed Recording Of Area 51, The Extraterrestrial Military Zone (Video)