His passion for mountaineering has taken him to hundreds of places around the world to develop his favorite activity: climbing mountains, regardless of the difficulty of each challenge.

Throughout his travels he has encountered countless stories. But one in particular, occurred in the Argentine Patagonia, did not happen by chance.

It happened in the town of El Chaltén, province of Santa Cruz, a tourist village located at the foot of the Andes mountain range, and one of the mountaineering and hiking mecca worldwide.

In January of last year, Alexey climbed to the top of the hill Fitz Roy (3,405 meters above sea level) with a client.

After climbing, and taking advantage of the good weather that day, they decided to take a walk along the nearby pass, from which you can see the group of peaks of the towering Cerro Torre (3,133 meters) with greater clarity.

Along the way, a strange smell of smoke stopped them. They walked a little more through the snow and found the remains of a shattered helicopter.

At first glance it was not clear when the accident had occurred, but the first feeling was that it did not date long ago: the remains seemed recent and the burning aroma could be felt in the air.

Through a brief inspection, Trubachev and his companion were able to warn that there were no traces of human bodies among the twisted irons of the aircraft.

However, something prompted the mountain guide to lift an aluminum casing with his hand, and beneath it he found a gold ring on whose inner circumference he had engraved a name: Monica.

“Finding that wedding ring with a name engraved inside it, in that tragic scene, put me in the need to understand what had happened there. Besides, I felt the solemn duty to return the ring to whom it was intended, to its owner “Alexey told RT. 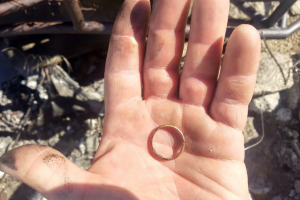 “For me it was a very serious event, because that object clearly had its history and I knew that the person carrying it should be very important to someone,” he explained.

Thus, when he returned to El Chaltén, the man went to give notice to the Police.

There he learned that the helicopter accident had occurred in December 2014, and that the fatal victim was named Pablo Argiz Vale (50), a pilot and rescue worker who lost control of the aircraft when he tried to help a group of German climbers stranded in the mountain.

Alexey returned to Russia with the ring in his possession and the idea of ​​looking for the widow of the deceased pilot.

In the distance, he entrusted himself with the task of finding that woman, who had not even had the opportunity to say goodbye to his partner.

“It was not difficult to contact Monica through social networks. So I wrote to her and told her that she had found her husband’s ring in the mountains,” she said.

After that, Trubachev sent the alliance to the woman through the mail.

Excited, Monica thanked the gesture and decided that from then on she would use the two alliances together on her finger. In a way, it was the way to keep Pablo always close to him.

“I think all this suggests that the connections of people, especially those who love each other, do not break with death. The pilot found a way to convey something to his widow. And I am happy to have had the opportunity to be part of that story,”Alexey concluded.

Newer Post“There was a rumble and then it fell.” Two Air Force Captains Die in Plane Crash in Ilopango
Older PostThe Bodies of the Ukrainian Victims of the Iran Air Crash Return Home to Their Families