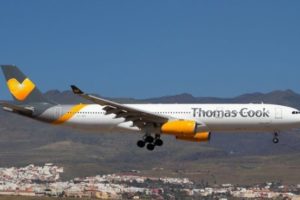 British tour operator Thomas Cook stated in its quarterly report that “is considering all strategic opportunities” in relation to its airline. This means that the airline, which manages 103 aircraft, can be sold.

The company noted that it “needs more financial flexibility and more resources to accelerate the strategy for further development: investment in its hotel chain, digitalization of sales channels and improving business efficiency”. After the announcement of Thomas Cook about the possible sale of the airline, the tour operator’s shares jumped 13% in price.

Thomas Cook’s loss in the first fiscal quarter of 2019, which ended in December, amounted to 60 million GBP, which is 30% more than a year earlier. Currently, the company’s debt is 1.6 billion GBP.

In contrast, Thomas Cook’s airline is largely profitable. It made earnings before financing costs and tax of 129 million GBP last year, although it reported a loss in the last three months of 2018.

Thomas Cook Airlines (UK) Limited is a British charter and scheduled airline headquartered in Manchester, England. It serves leisure destinations worldwide from its main bases at Manchester Airport and Gatwick Airport on a scheduled and charter basis. It also operates services from eight other bases around the United Kingdom. Thomas Cook operates planes in the UK, Germany and Scandinavia. Just under half of its airline seats are used by the tour operator’s own customers, with the remainder sold to rivals and the public. A quarter of the fleet flies long-haul.