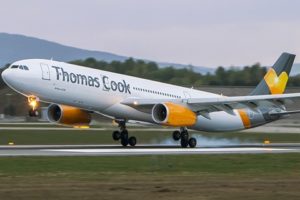 British tour operator Thomas Cook and its German subsidiary Condor Airlines are ready to play an active role in the restructuring of the insolvent company Air Berlin. In this way Thomas Cook also showed interest in the second second-largest German airline and its market share. Thomas Cook is directly interested in the continued operation of Air Berlin, as the company books some of its customers on flights with Air Berlin and its unit Niki, which means it is in the tour operator’s interest that the German airline’s operations continue.

“Thomas Cook and its subsidiary, German airlines Condor, are ready to actively participate in the future of Air Berlin”, says the official statement of the company’s press secretary.

On Tuesday, the second-largest German airline Air Berlin launched a bankruptcy procedure. The decision was made after the failure of the main shareholder Etihad to provide financial support to Air Berlin. Etihad said that it withdrew funding after Air Berlin’s operations deteriorated at an “unprecedented pace” in recent months.

It was reported that the company is negotiating with other industry companies, including Lufthansa, about the sale of structural units. Lufthansa is also exploring the possibility of hiring additional staff.

While Air Berlin, which has 8,600 staff, will continue flying with the help of a government loan likely to last it until mid-November.

Another tour operator TUI also announced its intention to participate in the company’s support.