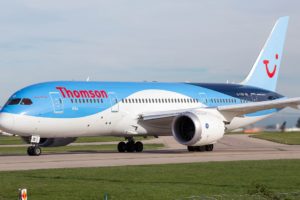 Thomson Airways Boeing 787 Dreamliner made an emergency landing at Manchester airport in UK after reports of problems with the engine. The airplane was making a flight from Orlando in USA to Manchester in UK, but suffered some technical problem at the approach. The crew received indication and needed to shut the left engine down. The aircraft continued for a safe landing on Manchester’s runway 23R about 13 minutes later. There were no reported injuries and damages during the landing.

The Boeing 787 Dreamliner was met by emergency response units on the runway, including fire engines, according to the standard airport procedures.

“As a precautionary measure and in connection with a minor technical problem, the plane made an emergency landing at the airport in Manchester”, said official representative of Thomson Airways. “Thomson Airways would like to apologise for any inconvenience caused to customers traveling on flight TOM147 from Florida to Manchester”, added the airline representative.

All the passengers left the plane. After short inspection the plane was released to fly from Manchester later during the day.

The local authorities and safety inspection initiated investigation for the accident.