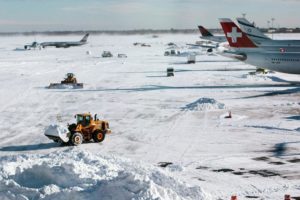 More than a thousand flights to the US were canceled on Sunday due to heavy rains and snowfall, which brought the Harper storm.

Because of heavy rains and snowfalls in the central and northeastern parts of the country, more than 1,000 flights were canceled at airports in Chicago, Boston, New York, and other cities. A state of emergency was introduced in New Jersey and Pennsylvania.

The airline JetBlue has already canceled 770 flights through Monday, and Delta Airlines has issued travel waivers for passengers affected by the storm.

Chicago’s O’Hare International Airport was one of the worst hit on Saturday, with more than 650 flights canceled. Cancellations in Chicago continued through Sunday, joined by 100 canceled flights at New York’s John F. Kennedy International Airport. Smaller regional airports—in Albany, Syracuse, Rochester, and Connecticut—are seeing about half each day’s flights canceled. Boston, however, looks to face the worst cancellations in the Northeast, with about 450 total flights canceled or half the day’s flights at an even larger airport.

The cancellation of flights to the USA will continue on Monday.