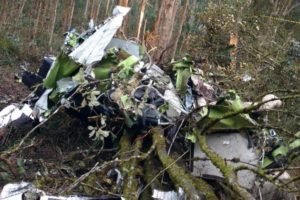 Three people are dead after light aircraft Piper PA-34-220T Seneca V crashed in a forest area in Paula Freitas, in the south of Parana, Brazil. Among the victims of the aviation accident is the 32-year-old state deputy Bernardo Ribas Carli, as well as the two pilots. The circumstances around the crash are unclear, but according to preliminary information of the local authorities investigation the aircraft Piper PA-34-220T Seneca V took off from Guarapuava and went to Uniao da Vitoria, but suffered technical failure and lost propulsion power.

Teams from the Tactical Relief Operations Group of the Fire Department work at the scene of the accident. The bodies of the three victims were referred to the Legal Medical Institute (IML) of Uniao da Vitoria.

According to the deputy’s advisory, Bernardo Ribas Carli was going to an event of truck drivers in Uniao da Vitoria (PR), city 20 km from the region of the accident and 240 km from Curitiba.

The Piper PA-34 Seneca is an American twin-engined light aircraft, produced by Piper Aircraft since 1971 and that remains in production. The Seneca is primarily used for personal and business flying. Certified on 11 December 1996, the Seneca V was put into production as a 1997 model year. Again the cowls were redesigned for increased performance, several cockpit switches were relocated from the panel to the headliner, and an improved engine variant, the Continental TSIO-360-RB, fitted with an intercooler, was used.