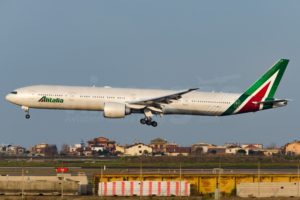 Alitalia Boeing 777, operating flight AZA/AZ784 from Rome Fiumicino Airport to Tokyo Narita Airport with 242 passengers and 14 crew, suffered severe turbulence during the approach to Narita, causing injuries to three cabin crew. The fasten seat belts signs were illuminated on time, but flight attendants had no time to prepare. The aircraft made a safe landing at Tokyo Narita Airport 20 minutes later.

The medical teams were dispatched at the plane after landing. One of the injured people was sent to the hospital for treatment, while the other two were released with minor head injuries.

There were no reported injuries among the passengers. The investigation for the accident is underway.

The aircraft Boeing 777 was able to depart for the return flight AZ-785 on schedule.

Boeing 777 is a long-range wide-body twin-engine jet airliner developed and manufactured by Boeing Commercial Airplanes. It is the world’s largest twinjet and has a typical seating capacity of 314 to 396 passengers, with a range of 5,240 to 8,555 nautical miles (9,704 to 15,844 km). Commonly referred to as the “Triple Seven”, its distinguishing features include the large–diameter turbofan engines, long raked wings, six wheels on each main landing gear, fully circular fuselage cross-section, and a blade-shaped tail cone. Developed in consultation with eight major airlines, the 777 was designed to replace older wide-body airliners and bridge the capacity difference between Boeing’s 767 and 747.