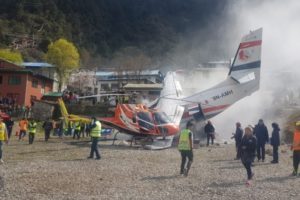 Summit Air plane Let L-410UVP-E20 Turbolet collided with two parked Manang Air helicopters Eurocopter AS 350B3e during a takeoff attempt at Lukla-Tenzing-Hillary Airport in Nepal. The aircraft and helicopter were seriously damages and the copilot of the aircraft sustained fatal injuries. Two persons on the ground at the helipad also died during the accident. Two other people received serious injuries and were taken to the hospital for medical treatment

The aircraft skidded off the runway during take-off and collided with the parked helicopters, killing copilot of the airplane and two policemen. Captain of the Summit Air plane Let L-410UVP-E20 and captain of Manang Air, who was in the helicopter, were also injured in the incident.

Lukla Airport is located on a mountain at an elevation of 9,334 feet (2,845 m). The runway is 527 m long with an 11.7% gradient. Takeoffs must be performed from the downsloping runway 24. The helipad is located to the right of the runway, about 100 m past the threshold. The airport is the gateway to Mt Everest. It is often referred to as one of the most difficult and dangerous airports in the world.

Let L-410 Turbolet is a twin-engine short-range transport aircraft, manufactured by the Czech aircraft manufacturer Let Kunovice (named Aircraft Industries since 2005), often used as an airliner. The aircraft is capable of landing on short and unpaved runways and operating under extreme conditions from +50 °C (122 °F) to −50 °C (−58 °F).