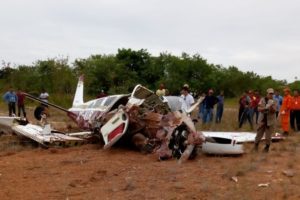 Three people died after single-engine aircraft Embraer EMB-720D crashed in a forest area Flores, south-central zone of Manaus, Brazil. The aircraft with five people on board fell during attempt to takeoff, but failed to get height and fell in the forest area. Two people were seriously injured, while another three died at the scene.

Fire brigade arrived at the scene of the accident and succeeded to rescue two of the people on board. The two survivors were referred to the Hospital and Emergency Room Joao Lucio and one of them is in serious condition. The other three people, including pilot and assistant pilot, died at the scene of the crash.

Embraer EMB-720 Minuano is a commercial single-engine piston airplane, produced in Brazil by Embraer and later by its subsidiary Neiva, under license of Piper Aircraft. Equipped with Lycoming engine with direct injection of fuel and 300 hp of power, it develops 270 km/h. Its electronic communication and radionavigation system was considered modern for the time. It can carry up to six people (1 pilot + 5 passengers) with ample luggage space.