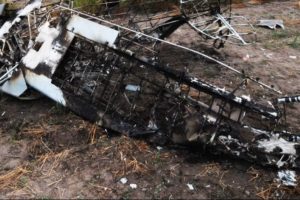 Three people died after airplane Cessna crashed near Cosala, Mexico. The aircraft departed from Guasave airfield an headed south-east, but caught fire near Cosala and crashed on the ground. The owner of the aircraft and two other passengers died at the accident, but more details were not revealed. According to witness evidences, the airplane was burning already in the air and after crashed on the ground exploded, without giving chances for the people on board.

The investigation for the root cause of the aviation accident is under way.

According to local media, the entrepreneur Andres Díaz Arredondo, who was operating a company for air services, was the owner and one of the victims of the plane crash. Police authorities said that the businessman left his home on Sunday and headed to the Guasave airfield, where he had a hangar with airplanes that offered air services. He was accompanied by two other people, whose identity is unknown.

Later the aircraft took off from Guasave and headed to south, crashing on 250 km from the Guasave airfield. The aircraft almost completely burned at the accident.

No more details were released.