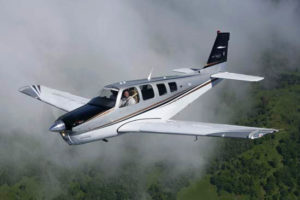 Three people died in Beech A36 Bonanza plane crash in Georgia, USA. The accident occurred in Bryan County and Coast Guard helicopter found the wreckage on 25 miles west of Savannah, Ellabell, Georgia. The plane was flying from the city of Savannah to Cobb County, but fell shortly after take off in a forest, which additionally complicated the rescue operation. The circumstances around the accident are unclear and will be investigation by the local authorities and Aviation Safety inspectors.

It was apparently the Coast Guard that first received a beacon signal around 9 a.m., about the same time that air traffic control lost contact with a tan and white Bonanza aircraft at about 300 feet.

So far, local authorities have identified the passengers, as 42-year-old William Cocke and 39-year-old Catherine Cocke – both of Savannah, Georgia. The pilot has not been identified.

The investigation is under way.

Beech Bonanza is an American general aviation aircraft introduced in 1947. The six-seater, single-engined aircraft is still being produced by Beechcraft and has been in continuous production longer than any other airplane in history. More than 17,000 Bonanzas of all variants have been built, produced in both distinctive V-tail and conventional tail configurations.