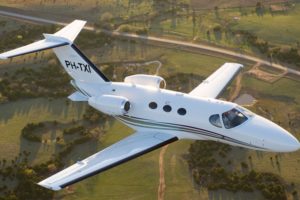 Business jet Cessna 510 Citation Mustang crashed at wooded terrain in Sieberatsreute, Waldburg, Germany. According to confirmed information all passengers, three men, died during the accident. The aircraft Cessna 510 Citation Mustang was approaching Friedrichshafen Airport en route from Egelsbach, coming down about 16 km north-east of the airport, but lost height and fell into the rural wooded area. Witnesses of the aircraft crash heard loud bang and immediately alerted the forces.

The rescuers and firefighter found the debris of the aircraft and extinguished the fire immediately, but unfortunately were unable to rescue the people on board. Police officers were also deployed at the scene to follow an investigation for the root cause of the accident.

The accident site is in the middle of a forest. There is no residential area in the immediate vicinity, so apparently there have been no other victims. When rescuers arrived at the scene there was a pungent smell of leaking kerosene in the air. Because of the possible risk of explosion, the police had widely closed the scene of the accident.

“We assume at the moment that the plane was only occupied by three people”, said the spokesman of the police in Konstanz, Markus Sauter. “There are no findings on the cause of the crash. We are waiting for the expert of the German Federal Office for Aircraft Accident Investigation”, added he.

The Cessna Citation Mustang, Model 510, is a very light business jet, built by Cessna Aircraft Company at their Independence, Kansas production facility. The Mustang, in standard configuration, has four passenger seats in the cabin, a toilet, and seating for two in the cockpit. Like most other light jets, the Mustang is approved for single-pilot operation. The Mustang is a low-wing cantilever monoplane with a swept wing, T-tail and tricycle retractable landing gear. One main door is located in the forward left section of the aircraft, with an additional emergency exit on the center right section of the fuselage. The airframe is primarily of aluminum alloy construction, with a three spar wing. The power is provided by two Pratt & Whitney Canada PW615F turbofan engines, mounted in pods on the aft fuselage.