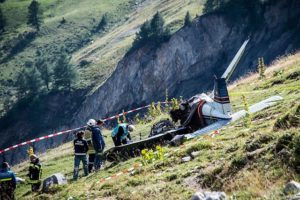 Three people died after light aircraft Piper PA-28-161 Warrior II crashed at the Sanetsch Pass in southwestern Switzerland. The plane took off from Sion airport en route to Biel-Kappelen, but in unknown circumstances started losing high and crashed. The aircraft inflamed after the accident, which put the peopl on board into a trap. At the area of the aviation accident the sky was clear, but there was wind. The investigation for the root cause of the accident is under way.

Firefighters from Sion airport were hired to proceed to the extrication of the victims. Three Air Glaciers helicopters brought police, firefighters and medical teams to the scene, but were unable to rescue any from the three people from the aircraft.

According to Swiss public media, the plane was a training aircraft and was schedule to make a flight to Biel-Kappelen and back in the same day.

The plane was a Piper Warrior II HB PTL, and was registered to the Seeland Aviation Club of Biel in canton Bern. The Warrior II advertised a 127-knot cruise speed at 75-percent power (compared to the Warrior’s 109 knots). Part of the speed increase was from the more powerful engine; the rest came from improved wheel-fairing aerodynamics.