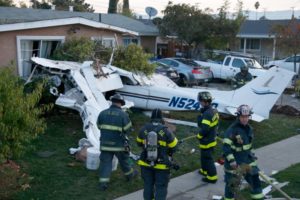 Three people were injured during emergency landing of aircraft Cessna 172P Skyhawk at Reid-Hillview Airport of Santa Clara County (KRHV) in San Jose, California. The aircraft suffered loss of engine power shortly after takeoff, losing high and forced to try landing on soft ground. The pilot maneuvered and attempted return to the point of departure, but impacted with residential building, causing serious injuries to three of the passengers on board. The accident was reported to local authorities and fire officers arrived at the scene to assist with rescue of the people and ensure safety at the area.

Two men and one woman were transported to a hospital. One person suffered a major injury, and the other two were lesser injuries.

According to the information of the local authorities the airplane Cessna 172 crashed into the garage of a single-family home. Fortunately no one in the home was hurt. The plane barely missed power lines and rooftops and parked cars before plowing through a rose-covered trellis over the driveway and slamming into the house.

About 40 gallons of fuel spilled from the plane, and hazmat personnel were on the scene to clean up.