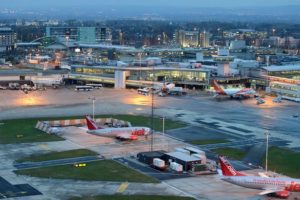 Several tourists were not allowed into the recreation area at the Manchester airport in UK because of their clothes. Emma Raikes, her two-year-old niece, mother and five other relatives had to fly from the UK to Florida to visit the Disney World entertainment center. At the same time, they were all dressed in white T-shirts with the image of Minnie Mouse, the animated character of Walt Disney. On clothes, each member of the family also had his name written.

Employees in the airport recreation area refused to let the tourists because of their clothes, although the service was ordered in advance. The passengers had already paid 170 GBP for this service. Travelers were allowed to pass only when they put on their sweaters over the T-shirts .

At Swissport, which manages the recreation area, they apologized to Emma Raikes and her family, explaining that passengers using the service must follow a certain dress code: for example, they are not allowed to appear in sports clothes and fancy dresses. However, an employee who refused to admit tourists to the zone misinterpreted these rules. The company called on tourists to get in touch to settle the conflict.

Earlier in August it became known that the carrier of Saudi Arabia Saudia Airlines introduced a strict dress code for passengers, forbidding men shorts, and women – clothes that open hands and feet.