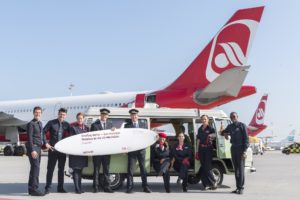 German union of service employees today Verdi called troubled airline Air Berlin and its potential buyers to initiate a rescue plan for its 8,000 employees. Lufthansa and Easyjet were selected for preferred buyers of the Air Berlin assets of the airline, expecting to offer prospects for 80% of its employees.

“Now they must enter into a contract, which is why we want Air Berlin and potential buyers to agree on a real bailout plan”, said the air transport union attorney, Christine Behle. “For 20% of employees without immediate prospects, a social plan can be drawn up and a transitional company created. This would enable the dismissed employees to work in optimal conditions for a new job through professional support, qualification and appointment”, added she.

The trade union Verdi wants to quickly begin negotiations on the future of Air Berlin employees, many of whom are already very concerned.

The largest German airline, Lufthansa, has already announced that it wants to hire up to 3,000 people in order to expand its low-cost subsidiary Eurowings, which will receive Air Berlin’s aircraft after purchase. Eurowings provides an accelerated procedure to attract Air Berlin employees but does not guarantee their appointment, as candidates can be crews from all airlines.

British airline easyJet does not give any information about its intentions for the staff of the failed German airline.

The negotiations between the two groups to acquire Air Berlin’s assets have to be completed by October 12.