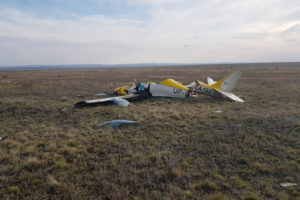 Training aircraft B&F Technik FK14 Polaris crashed near Karagandy Aerodrome Balapan in Kazakhstan. The two people on board died after the accident. The accident happened during the execution of the training flight and the landing approach. The aircraft went into a spin when imitating engine failure. The accident was reported to the local authorities and at the scene were sent rescue teams, which were not able to save the two people on board.

The investigation for the root cause of the accident will be initiated by the Ministry of Industry and Infrastructure Development of Kazakhstan.

The aircraft was owned by Aviation Training Center Balapan and registered under number UP-LA198.