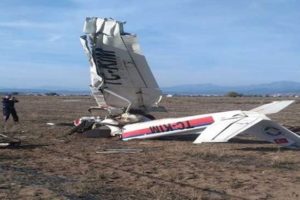 Small private training aircraft Cessna 150M Commuter crashed in Manavgat district of the Turkish province of Antalya. The both people on the aircraft, trainee and instructor, died at the accident. Security and rescue teams arrived immediately after the crash at the scene of the aircraft crash. Unfortunately there were no able to rescue none of the two people on board. Circumstances around the accident are no clear.

The investigation for the root cause of the crash is under way.

The governor of Turkish province of Antalya made a statement on the case and ensured that local authorities took all the necessary measures to rescue the people, but unfortunately they died immediately after the crash.

The Cessna 150 is a two-seat tricycle gear general aviation airplane that was designed for flight training, touring and personal use. The Cessna 150 is the fifth most produced civilian plane ever, with 23,839 aircraft produced. The Cessna 150 was offered for sale in the 150 basic model, Commuter, Commuter II, Patroller and the aerobatic Aerobat models.