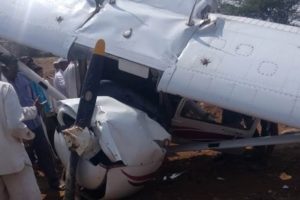 Light training aircraft Cessna 172S Skyhawk SP crashed in Pune District in Baramati, India. The accident happened shortly after takeoff in unknown circumstances. Following the crash, the trainee pilot was injured and transported to the local hospital for medical treatment.

Police identified the pilot as Siddharth Titus (30), who has sustained a severe injury on the right hand but is out of danger.

According to preliminary information, the aircraft Cessna 172 Skyhawk was flying at 3,500 feet when it developed a snag, which caused loss of height and crashing on the ground. Fortunately, there were no injured people on the ground.

The investigation for the root cause of the crash is under way.