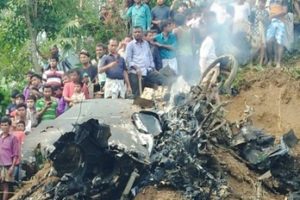 Training aircraft Yakovlev Yak-130 crashed near city of Chittagong in the south-east of Bangladesh. The airplane, which belongs to the country’s Air Force, had taken off from BAF Base Zahurul Haque in Chittagong and crashed on a lychee farm owned by one Foez Ahmed at Ward -2 of Faridghona. The pilots succeeded to abandon the plane through the catapult system and did not suffered any serious injuries. The reason for the accident is under investigation by the country’s military officials. The pilots were rescued and taken to the air force base, where will be enquired for the circumstances around the accident.

The contract for 16 Yak-130 aircraft for Bangladesh was signed in 2014. The deal is included in the package of military-technical cooperation between Russia and Bangladesh, which totals up to 1 billion USD. The contract also includes an option to purchase 10 additional units.

Yak-130 is a new generation of combat training aircraft developed by Yakovlev Design Bureau, now the Yakovlev Engineering Center in the Irkut NPK. It is intended for training and combat training of flight personnel, as well as for combating air and ground targets in simple and difficult weather conditions. Its flight characteristics and advanced control system capabilities make it easy to adapt the Yak-130 to prepare for flights on various types of modern aircraft, including 5th generation fighters.

Russian specialists are ready to fly shortly to Bangladesh to help probe the crash of a Yak-130 combat training plane of the Bangladeshi Air Force.