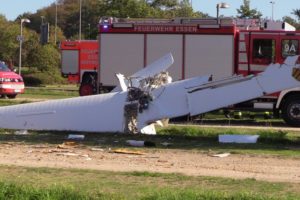 Training single-seater glider Schleicher ASK 18 crashed near German airport Essen/Mulheim. The details on the the cause of the accident are not yet known. Eyewitnesses report that the plane was already in the approach before it crashed. Shortly after the accident, the fire brigade and police moved to the scene of the accident.

The wreckage of the glider were found near car park P10, but fragments of debris spread on hundred of meters from the crash site. The plane was demolished.

The air traffic control will take over the investigation.

The crash site is only about 100 meters away from the marquee, in which since this weekend starts the Oktoberfest. The Oktoberfest continues on Tuesday, October 2nd. This Sunday the tent was closed temporary.

The Schleicher ASK 18 is a single-seat sailplane that was built by the German manufacturer Alexander Schleicher GmbH. It was designed to be a sturdy aircraft for inexperienced solo pilots and so uses a simple and rugged construction and has docile handling characteristics.