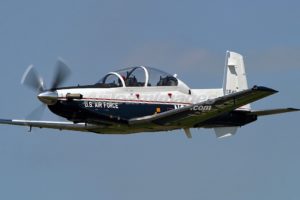 Training US Air Force plane Beechcraft T-6 Texan II crashed at Waurika Lake in Jefferson County, Oklahoma on 40 miles from its base. The pilot and co-pilot were able to safely eject, but aircraft was completely damaged. The emergency crews were quickly dispatched to the scene of the accident. the circumstances around the crash are unclear and not revealed by the military officials.

The crash is under investigation, according to the announcement. A base spokeswoman told that more information will be released as it becomes available.

Beechcraft T-6 Texan II is a single-engine turboprop aircraft built by the Raytheon Aircraft Company (which became Hawker Beechcraft and later Beechcraft Defense Company and was bought by Textron Aviation in 2014). A trainer aircraft based on the Pilatus PC-9, the T-6 has replaced the Air Force’s Cessna T-37B Tweet and the Navy’s T-34C Turbo Mentor.