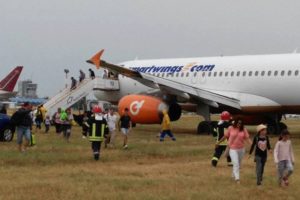 Travel Service airplane Airbus A320 suffered hydraulic failure during landing at Bourgas Airport in Bulgaria and veered right out of the runway to reduce speed. The plane was en route from Brno to Bourgas with 178 passengers on board, but after touchdown during landing got technical failure and was unable to reduce speed on the runway. The aircraft came to a stop with all gear on soft ground about 1900 m away from the airport’s runway. Fortunately during the emergency landing there were no injuries reported.

“After touchdown the airplane did not reduced the speed, as obviously the hydraulic valves did not work. The aircraft continued at the same high speed. The pilot apparently tried to reduce and so suddenly he curved the plane and he went off the track, so he managed to gradually reduce the speed”, said a passenger on board, Zdenek Kupsa.

After the aircraft stopped the crew radioed they needed assistance. The passengers disembarked onto soft ground via mobile stairs and transferred by bus to the terminal.

The Bourgas Airport was closed after the accident and all the flights were redirected to Varna.

The aircraft Airbus A320 suffered hydraulic problem after landing and the nose wheel steering went inoperative. The pilot decided to stop the aircraft in soft ground and maneuvered for runway excursion. The investigation is under way and the safety inspection of the plane will be done after being towed outside the runway.