The airline noticed the deception by the photos that the passenger posted on their social networks and proceeded to sanction him.

The Russian airline Aeroflot tried to prevent the passenger from a flight from Riga (Latvia), with a stopover in Moscow, to travel with his cat in the passenger cabin. Since the cat was overweight, the company’s employees indicated that the place corresponding to the animal was the cargo hold. However, the traveller, identified as Mikhail Galin, decided to delay his flight, to borrow a lighter weight cat from friends to be able to pass control of the airport and subsequently make the change.

Thanks to the fact that Galin shared the story on his social networks on November 6 with several photographs, the airline was able to punish him by withdrawing his points from his loyalty program. The man seemed to take his punishment seriously, because, in another post on Facebook, he has reflected more seriously on what happened with a short text accompanied by a photo of his pet at an early age “when his weight still met the requirements of the air Line”. 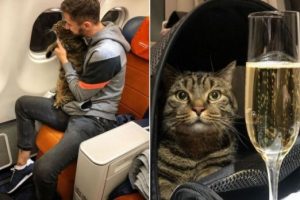