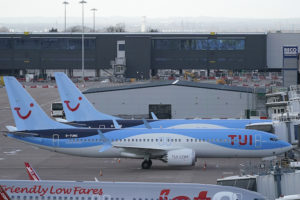 TUI aircraft Boeing 737 MAX 8 landed by an emergency at Sofia Airport in Bulgaria after being rejected from most of the EU airports. The aircraft was en route from Hurghada to Amsterdam, but after entering the EU air space could not continue because of the ban on flying this model airplane and rejected landing at Amsterdam airport. The plane changed the route to Budapest in Hungary, where the landing was also rejected. Thus, the TUI aircraft Boeing 737 MAX 8, which was over Romania, diverted to Sofia for safe landing a few minutes later.

All the people were disembarked at the terminal and their aircraft was stuck in Sofia until further notice. The passengers were accommodated in a hotel, waiting for replacement aircraft, which was sent by the tour operator.

This happens after the two air crashes with Boeing 737 MAX 8 that killed 346 people in Indonesia and Ethiopia.

Meanwhile, the EU banned operations of Boeing 737 MAX 8 until further investigation of the second accident with such aircraft in Ethiopia. Currently, operations of the airplane were suspended almost all over the world.